Trying to define American cuisine is challenging enough, refining the list to just 10 entries is even harder, but we’ll give it a go! American food as a whole has an unfortunate reputation around the world, known for their fast food, processed snacks and diet sodas. But in a country with 50 states, each as proud of their heritage as each other, it doesn’t take a rocket scientist to work out that American cuisine is one of the most unique and varied in the world. From Maine’s Atlantic coastline in the east to the isolated island of Hawaii in the Pacific, it’s easy to see that Americans love their food and love sharing it too. Here are our top 7 regional dishes from east to west.

It doesn’t get more mouthwatering than this… although you could easily argue that statement for every item on this list! Traditionally lobster rolls are served in a Frankfurter bun and stuffed full of butter soaked lobster, yum! Although the dish originated further south in Connecticut, they are mostly synonymous with the state of Maine. If you’re in Maine and looking to try a lobster roll, do us a favour, please don’t get it from McDonalds! There are numerous restaurants and bars that serve delicious, fresh lobster, so many in fact that you won’t want to leave. Cliched? Maybe, but if there is one place in the world you should try pizza outside of Italy, this is it. Pizza arrived in the Untied States in the early 20th century with Italian immigrants, who largely based themselves in New York. New York style pizza is made using a hand-tossed base, a layer of tomato sauce and fresh mozzarella cheese with a variety of different toppings. Famously consumed on-the-go in single portions, the New York style slice is typically much larger than other styles of pizza and has become romanticized in local culture. Don’t leave New York without trying one. The Key lime takes its name from the Florida Keys and is, not surprisingly, the main flavouring in Key lime pie, one of the most iconic dishes of the south east. Typically much stronger than a regular lime, they Key lime is much smaller and has a distinct sweet and sour flavour. The pie its self is made of Key lime juice, egg yolks and condensed milk; both the Key lime juice and the egg yolks give the filling an appetizing yellow colour and the combination of milk and lime gives the filling a thick consistency. The base is usually made with shortcrust pastry and topped off with a meringue, made by whipping egg whites until thick. In 2006 Key lime pie was made the official pie of Florida, making it an easy choice for this list. If you’ve ever Forest Gump, you’ll be familiar with the shrimping industry in the south. Gumbo is a famous Louisiana stew that originated in Africa and was brought over to the States by slaves in the 18th century. The stew takes its name from a plant found in South Asia and West Africa called Okra, or Gumbo in English, which is used as a thickening agent. There are several types of Gumbo, found in different parts of Louisiana, Creole to the southeast and Cajun to the southwest. The Cajun version usually has a deeper brown colour thanks to a darker thickening agent and is most famously used with shrimp instead of beef or other meats. The dish is an important part of Louisiana heritage and is revered throughout the state. If you’re looking for a good-old American BBQ, there isn’t a better state to visit than Texas. What separates a barbecue in Texas to that of other American states, is their primary use of beef, and brisket is at the forefront of Texan cuisine. The name Brisket relates to the cut of beef which is taken from the lower chest of the animal; typically a tough cut of beef, it takes expert cooking to produce the tender, succulent dish you’ll taste at a Texan Barbecue and this cooking method is highly contested at various barbecue competitions around the state. If you’re in Texas for one of these competitions, we highly recommend it, they’re sometimes tied in with country music shows and rodeos and are a fantastic introduction to Texan culture. To give you an idea of how famous this dish is, in the 2002 Winter Olympics hosted in Utah, funeral potatoes were depicted on one of the souvenir food pins. Traditionally served at funerals to mourn the loss of a loved one, Funeral Potatoes are deeply engrained into Mormon culture and are served throughout the Mormon Corridor, stretching from southern Wyoming to northern Arizona. The dish is made using a potato, chicken soup, sour cream, cheese , onion and butter mixture and topped with a crusting of either bread, hash browns or ingredients such as corn flakes. It might not be the most intricate dish, but trust us it is mighty delicious and an important part of the American cuisine. 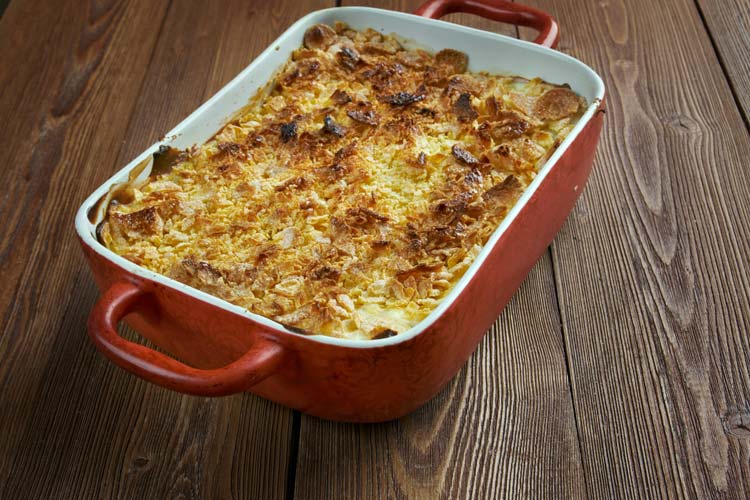 A delicious dish of Funeral Potatoes

Las Vegas – All You Can Eat Buffet

Although this isn’t really a classic dish as such, the all you can eat buffet encompasses everything that’s great about American cuisine, and you can literally eat as much as you want! Las Vegas is known the world over for it’s over indulgence, a city of flamboyant light shows, towering replicas of famous landmarks and of course the all you can eat buffet. Although you might associate buffets with low quality food, pumped out by the kitchen to the masses, for the most part that’s not the case in Vegas. In Vegas, you get what you pay for; head to one of the upscale buffets for one of the most unforgettable dining experiences of your life. The Cosmopolitan’s Wicked Spoon is one of the most famous buffets in all of Vegas, focusing on quality as well as quantity. If you’re looking for pure indulgence, Vegas is the place to be.